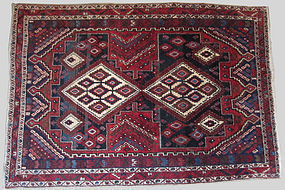 Antique Persian Afshar Hand Knotted Rug
Antiquq Persian Afshar style rug hand knotted from wool.The Afshar were a preeminent nomad tribe who crafted high quality rugs. The two stepped medallions in the center is one of their typical designs. It measures 6'5" by 4'4".
item #1192994
$2,500.00 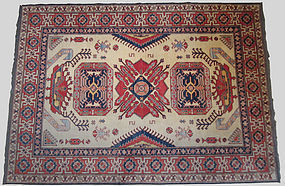 Antique Hand Knotted Kazak Rug
Antique hand knotted wool kazak style rug. The rug has a cream colored ground with a central red medallion that has pairs of arrow-like lines crossing through it. It is flanked by a blue and red bordered medallion on each side. The ground is decorated with flowers and other small ornaments. The border has three registers: a blue band with a cream and red bordered floral scrolling design, a red band with blue 8 point stars and cream colored icons, and a cream band with a blue bordered by red... Click for details
item #1192992
$1,200.00 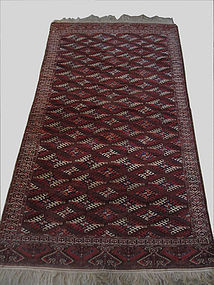 Antique Hand Knotted Yomud Persian Rug
Antique hand knotted Persian wool rug made in the yomud style. It has deep burgundy colors with blue, white, orange and red accents in the pattern. One corner has a braided slipped knot made of the fringe. Late 19th early 20th (Circa 1900). It measures 12'6" by 7'2".
item #1192989
$8,000.00 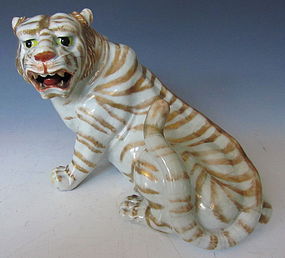 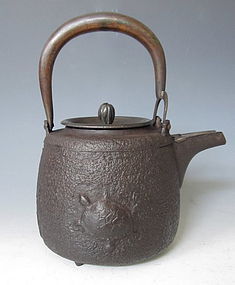 Antique Japanese Sakatsugi Sake Server
Antique Japanese iron sake server or sakatsugi. The body contains an image of a turtle, a symbol of longevity and used in festive and auspicious occasions. Next to the turtle, although hard to see, is a signature which reads Tosa no Kami Mitsusada, who was a painter from the Tosa School (1738-1806). The image on the sakatsugi is possibly based on a painting by the artist and was incorporated into the design. The "wear" seen on the handles were done intentionally to give the sake server a rustic... Click for details
item #1192473
Sold 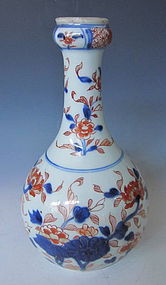 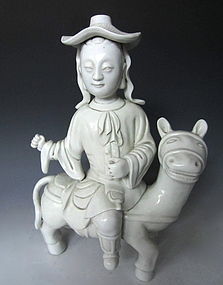 Antique Chinese Dehua Porcelain Statue
An antique Chinese dehua (also known as blanc de chine) of a man riding a donkey-like animal. Unlike the normal subject matter often produced in dehua porcelain, the figure is not dressed in a Chinese manner, but in a European style. The back contains two seals: the gourd shaped seal reads: dehua and the square seal is possibly the artist name, which translates as: seal of Ke Qianzhong. Age: Late 19th -20th century. Size: height 12.75" width 5.25" length 8.75"
item #1192407
Sold 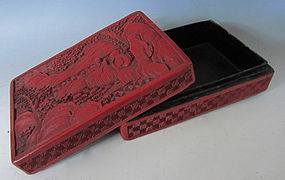 Antique Chinese Cinnabar Lacquer Box
A small Chinese cinnabar lacquer box. The lid contains a carving of two literati scholars sitting down and enjoying th view of the distant landscape. The entire box is carved with a diamond pattern motif. The inside and bottom section of the box is done in black lacquer. Age: Early 20th century. Size: height 2" width 3.9" length 3.8"
item #1192400
$300.00

Antique Chinese Hardwood Sculpture of Scholar Sage
Antique Chinese hardwood sculpture of a scholar or sage like figure holding a ball. The figure has a contemplative expression possibly thinking of the life of a recluse, the ideal of a Chinese literati scholar. Age: 19th-20th century. Size: height 11.75" width 3.75" length 5.1"
item #1192388
Sold 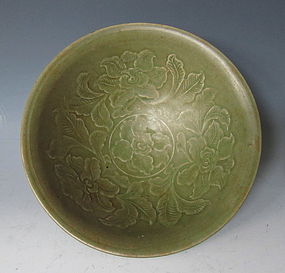